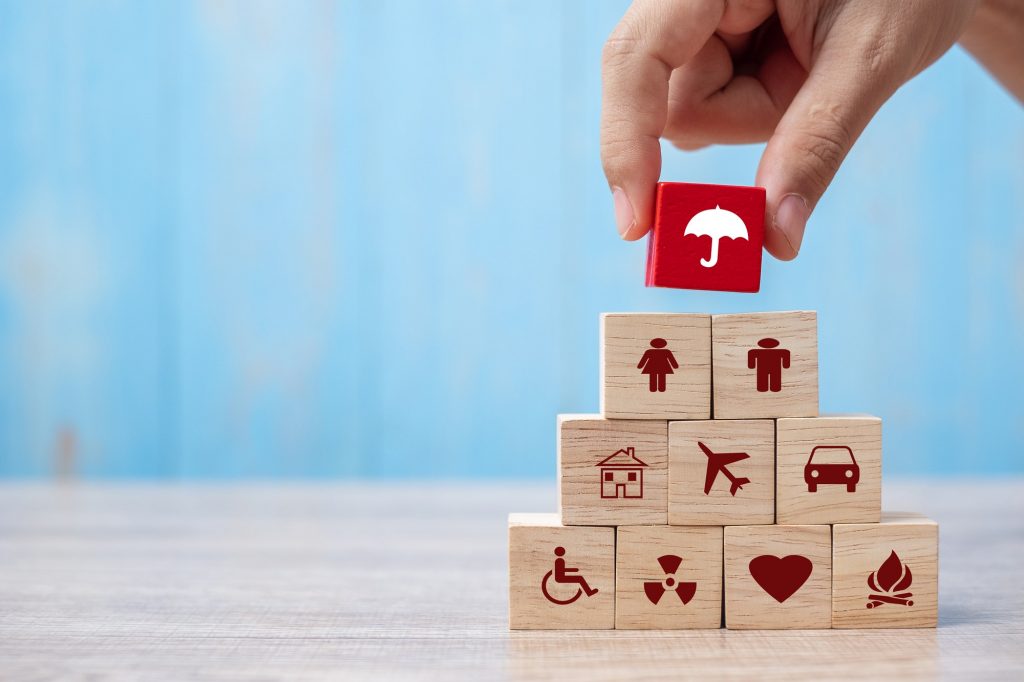 Bank hybrid notes are great defensive investments with yields that more than compensate for their risk.  NAB’s new $1.65 billion hybrid issue is an example.  But they don’t suit all investors, and they are complex, which is why I have written about them twice already in this newsletter, here and here.  This third article compares the hybrid notes issued by Australian banks to the ‘catastrophe’ bonds issued by insurance firms.  The similarities and differences bring out key ideas about the type of risk that hybrid notes contain, and therefore which investors they best suit.

To understand bank hybrid notes it helps to see that they are not unique, but instead part of class of bonds that help shore up the capital of financial firms in a crisis.  Insurance catastrophe bonds (cat bonds) are in the same class as explained next

Property insurance companies are in the business of absorbing risk through insurance contracts and then eliminating most of that risk through diversification. Unfortunately, local insurers can’t achieve full diversification. They face the risk that the claims from a single windstorm (cyclone, hurricane, typhoon) or earthquake, might eat into their capital to the point where the insurer is no longer viable.
The regulator of a local insurer will insist that the insurer holds an amount of shareholder capital (called reserves) that matches the likelihood of these catastrophic events. A local insurer can reduce the amount of shareholders’ capital it must hold by ceding some risk to other parties.
There are two ways insurers cede risk. The main way is to cede some of the risk of a very large insurance loss to global reinsurance firms, such as Munich Re, Swiss Re or Gen Re. These massive reinsurers are ‘insurers of insurers’, achieving diversification at a global level by pooling the risks of local insurers from all around the world.

Another way that primary insurers cede the risk of large losses is by issuing catastrophe (cat) bonds.   An example will illustrate the role of cat bonds.   Imagine that a primary insurer based in Florida is concerned that if a large hurricane hits that densely populated state, then the total claims might drain so much capital from the firm that it is unable to continue writing insurance, or even to meet all the claims.
A primary insurer (with the help of consultants) estimates that in any one year there is a 1-in-50 chance (probability of 0.02) that a hurricane will cause it to have catastrophic claims of more than $2.5 billion. The primary insurer wants protection against the risk that claims will exceed $2.5 billion in any particular year.   Specifically, it wants investors in its cat bonds to pay 80% of the primary insurer’s claims in the layer between $2.5 billion and $3.0 billion of total losses.
To achieve this protection the primary insurer  issues cat bonds with a total principal of $400 million to pension funds, university endowments, and other institutional investors.  The term of the bonds is 3 years and they yield the  90 day T-bill yield + 4.0% (risk premium).
If a severe hurricane hits Florida and the primary insurer’s losses exceed $2.5 billion then the principal of the cat bonds is written down by $0.80 for every $1 of the insurers losses, up to a maximum of $400 million (the total principal of the cat bonds).   At the beginning of each year bondholders have an ‘expected’ loss of 2%, even though in most years they will lose nothing.

What is the analogy in banking of local insurers ceding risk to global reinsurers?   There is none because, unlike natural catastrophes, economic crises are correlated around the world.   Consequently, locally concentrated banking risks don’t diversify away at the global scale.
There is however a banking analogue of catastrophe bonds.   Banks issue contingent convertible bonds (CoCos) to transfer risk of catastrophic losses on their loan books to institutional and personal investors.   In Australia these bonds are called hybrid notes and are owned principally by wealthy households.
National Australia Bank (NAB) has just completed a $1.65 billion issue of hybrid notes (NAB Capital Notes 3, aka NABPF).   These notes are complex and have many important terms, but for our purposes they can be condensed to the following:
1.  The notes have a term of 9 years, NAB can redeem the notes after 7 years.
2.  The yield is 90 bank bill rate (BBSW90) + 4.00%.  The principal is $100.
3.  If a banking crisis hits and NAB’s loss absorbing capital halves, then the notes will be converted into shares.   The practical effect of the forced (mandatory) conversion is that the noteholders’ loss of capital depends on how much NAB’s share price has fallen since the time the hybrid notes were first issued (20 March 2019).
For example, if NAB shares have fallen by 70% when forced conversion occurs, then noteholders will receive $100 worth of NAB shares, and suffer no capital loss.   Alternatively, if the share price fall is 88%, then shareholders will receive $60 worth of shares, and suffer a capital loss of 40%.
The expected losses of NAB hybrid note holders is very low for three reasons.   First, 80% is a very large fall in the share price relative to the volatility of bank shares – it is a fall of more than 4 times annual volatility.   Second, Australian banks are highly profitable and can raise additional capital by issuing new shares and/or cutting dividends.   Third, the four big banks in Australia are too big to fail.   Expected losses are less than 0.5% on an annual basis (meaning that the probability of large losses in any one year is very low – less than 1-in-200).

Understanding the risk premium on Cat bonds and CoCos

In both our examples, the Cat bond and the Hybrid note, the spread over the yield on bank bills is 4%.   Let’s say that 50 bps of the 4% spread is compensation for loss of liquidity: both payments liquidity (aka funding liquidity — the money is locked up for many years) and asset liquidity (aka market liquidity — buying and selling the notes is costly).   That leaves 3.50% per annum as compensation to investors for bearing risk in both the cat bonds and the hybrid notes.
Now we have reached the crux of this article.   Both types of notes are absorbing the risk of catastrophic losses – insurance claims from natural disasters and loan losses in a banking crisis.   However, the 3.50% per annum compensation in each case is for very different types of risk.   And, that difference tells us who are the natural owners of these notes.
Figure 1:   Breaking down the credit risk spread on cat bonds and hybrids

In both cases the 3.5% risk premium is compensation for three things:   T he expected loss on an annual basis;  risk that is not diversified away (systematic risk);  and uncertainty.   The cat bond adds almost zero systematic risk to the portfolio of an investor because losses on a cat bond are uncorrelated with any other part of the investor’s portfolio.   What the cat bond investors need extra compensation for is ‘uncertainty’ (as opposed to risk).

Let me explain the meaning in finance of uncertainty (known technically as Knightian uncertainty).   Where investors know the full set of things that can happen and the relative probabilities of those things, then investors face risk.   But where investors either don’t know the full set of things that could occur (‘black swan’ events are possible) or they don’t know the relative probabilities of events (what is the probability of a catastrophic hurricane hitting Florida?), then they face ‘uncertainty’.
Financial markets love risk – they can slice and dice it and move it to where it is born at the lowest cost.   But financial markets hate ‘uncertainty’.   To bear uncertainty, investors demand higher returns — usually much higher returns.
Investors in cat bonds face uncertainty because accurate estimation of probabilities of natural disasters is essentially impossible due to the lack of physical models and of data.   Only 3 Category 5 hurricanes have ever come ashore in the United States since records began, so how could you possibly estimate with accuracy the probability that a Category 5 hurricane will strike Miami or Jacksonville next year?   You can’t, so investors face uncertainty and they demand an extra 1.5% for bearing it (and often a lot more).

The worst type of systematic risk in hybrids

The hybrid note is quite different.   Here investors face risk rather than uncertainty, because data on banking crises and stock movements is plentiful.
Instead of uncertainty hybrid note holders face systematic risk of the worst type.   Systematic risk is risk that cannot be diversified away and therefore adds to the risk of an investor’s overall portfolio.   Hybrid notes don’t bring to an investor’s portfolio normal systematic risk, which merely amplifies the fluctuations in the value of the portfolio.   The systematic risk in hybrid notes is worse than that.
The losses of capital in a hybrid note occur in the worst state of the world for investors – during a severe banking crisis when the investor’s wealth has already fallen greatly.   Substantial losses on the hybrid notes of Australian banks are very, very unlikely, which is why the expected loss is so small.   But if that unlikely event does ever occur, then the loss of capital will occur at the very worst time, which is why the premium for bearing systematic risk (3.0%) is so high in hybrids.

Only investors who can afford to lose all of their investment in hybrid notes at precisely the worst time (their other investments have fallen greatly in value) should be invested in hybrid notes.   For the most part that means wealthy families.   But if that condition can be met then hybrid notes are a terrific wealth accumulation investment, because they offer about 3.0% extra return year in, year out for insuring banks against a very unlikely event.   And, they are defensive against all fluctuations in bank share prices – all except an exceptional fall in a catastrophic banking crisis.